​Marian Manor HealthCare Center has a 5 STAR Rating with The Centers of Medicare and Medicaid Services.

​The Nursing Home Compare Web site features a quality rating system that gives each nursing home a rating of between 1 and 5 stars.  Nursing homes with 5 stars are considered to have much above average quality and nursing homes with 1 star are considered to have quality much below average.  The Overall rating includes a separate rating for each of the following areas including Health Inspections, Staffing  and Quality Measures (QMs) . Marian Manor’s rating for Health Inspections moved from 3 star to 4 star rating, Staffing moved from 4 star to 5 star rating, and Quality moved from 4 star to 5 star rating for an overall  5 star rating!!!  Thanks to the great staff whose dedication and hard work provided quality resident care during a very challenging year dealing with the COVID pandemic.  Great job everyone!!
​Sandy Gerving, Administrator
New Phone System Information.   When calling you do not need to use an extension, just stay on the line and someone will answer. Please continue calling to make visitation appointments by asking for Michelle or Deb and leave them messages in case they are not here when you call. Thank you.
November 20, 2020:  The GUPPIES (Glen Ullin People Promoting Interesting Events) sponsored a parade of lights. Local businesses and farmers/ranchers participated. The parade passed the Marian Manor Estates and HealthCare Center. Thank you to all those that participated and Thank You to the GUPPIES for a wonderful time of viewing the floats.
Parade Of Lights Video 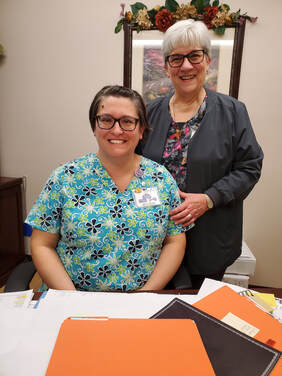 Loretta Gerving (on the right) is retiring from the Director of Nursing position at the Center effective November 11, 2020.  She has held this position for the last 16 years of her 38 years of employment.  Loretta began her employment at Marian Manor Nursing Home in 1973 as a Dietary Aide until 1974.  In 1980 she returned and worked as a Nurse Aide until 1982 when she attended Dickinson State University receiving her nursing degree in 1984.  She was employed as a Registered Nurse until 1986 when she began working as the Social Worker Designee.  In 1990, Loretta was employed as Resident Care Coordinator and in 1997, she was promoted to the Assistant Director of Nursing certified as a Gerontological Nurse in 1998.  She accepted her current job as the Director of Nursing in 2004.  Starting her retirement, Loretta plans to take two months off and returning to the Center in a part-time position as the Infection Control Preventionist and Quality Assurance Manager.  Loretta has enjoyed her time at Marian Manor but feels it is time to pass the baton.  Loretta lives in Glen Ullin with her husband Chuck.  She hopes to spend more time with her two sons Pat and Brent and their families including 5 grandchildren and 2 great-grandchildren.

Emily Dakken (on the left) has been promoted to the Director of Nursing position beginning her official duties this month.  Emily started her employment with Marian Manor in 1996 as a Certified Nurse Assistant.  She worked in that capacity while attending DSU until 2001 when she completed her studies as a Licensed Practical Nurse.  She continued her studies and graduated as a Registered Nurse in 2003.  She continued to work at Marian Manor during this time as a nurse and was promoted to the Assistant Director of Nursing in 2018.  Emily is excited and looking forward to the challenges of her new position.  Emily lives in Hebron with her husband Seth and their four children, Justice, Kadence, Scarlet and Felix.
Congratulations and best wishes to Loretta in your retirement and success to Emily in your new position.
For those of us on the outside looking in the Marian Manor staff are among the best. Due to the COVID-19 we don't have the opportunity to see them personally and thank them for their wonderful care and compassion they give to our loved ones. The video below is intended to express our gratitude and recognize them for their dedicated service. Thank you to the entire staff.

Alex Muggli passed away Saturday, October 3, 2020 at. St. Gabriel’s Community in Bismarck.
Follow the link below to read his complete obituary.
https://memorials.stevensonfuneralhome.com/alexander-muggli/4350058/index.php
Alex Muggli was an original member of the Marian Manor Board of Directors since 1963.  To be closer to their family, they moved to Bismarck in 2018.  Following is a wonderful story about Alex and his wife Alice and their first outdoor visit at the St. Gabriel Community following visitation restrictions since March 2020.  Marian Manor Healthcare Center is also providing similar outdoor visits for our families and residents and it warms our hearts to see loved ones reunited.

In 2018, Alex Muggli, age 102, & Alice Muggli, age 91, moved in to St. Gabriel’s Community.  Alice moved into St. Gabriel’s skilled nursing community and Alex moved into an apartment in our Assisted Living community, both located on the same campus. Separated by a walkway, Alex visited Alice every day and enjoyed meals and activities with her. Before restrictions the couple would go to Happy Hour every Wednesday and enjoy live music and refreshments. When COVID-19 hit the state of North Dakota, restrictions were put into place that eliminated the ability to travel to the other side of St. Gabriel’s building. During restrictions, the couple celebrated their 73rd wedding anniversary separately.  “We hardly missed a day of seeing each other in 73 years,” Alex said.
Today, North Dakota blessed the Muggli’s with a beautiful day and perfect weather for their first time seeing each other in 3 months. Their daughter, Sheila, joined in their outdoor visit at St. Gabriel’s Community, and they spent their time laughing and enjoying each other’s company. Alice said, “Oh my goodness, seeing Alex for the first time in three months felt so good, I missed him so much.”
St. Gabriel’s Community is so pleased to be part of today’s special moment.  We look forward to reuniting more of our residents with their loved ones, and would like to thank our staff for their tremendous dedication to our residents during this time. 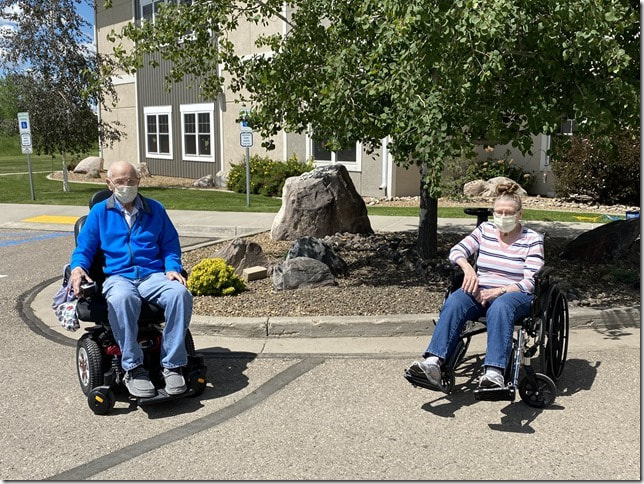 The 50th Anniversary was celebrated with a Residents Family Day on September 21, 2019 and a lunch for the public in the Sacred Heart Parish Center on September 22, 2019.
For the Family day snacks were served at the Nursing Home and a video recording some of the history was shown.
On the 22nd a lunch was served by members of the board and staff in the Sacred Heart Parish Center. The History video was presented after the lunch.
Videos of the celebration are presented below. Too view full screen click on the diagonal arrows in the bottom right of the video. Press the Escape key to return to normal screen.

Grandparents Day, August 5, 2019
To celebrate Grandparents Day we were blessed to have Jim Geiger from Mandan, North Dakota provide an hour of accordion music.  Snacks were served by volunteers Linda Peltz and Avelina Smith. Thank you to Jim, Linda and Avelina for making this a special day.
To enjoy a few of the songs by Jim, view the video below.  To view full screen click on the diagonal arrows in the lower right. To return to normal screen press the Escape key on your keyboard.
Pet Show. Local area residents bring gentle pets to the facility. The nursing home residents are given the opportunity to pet and love on the animals. Thank you to the folks that take the time to make someone's day. 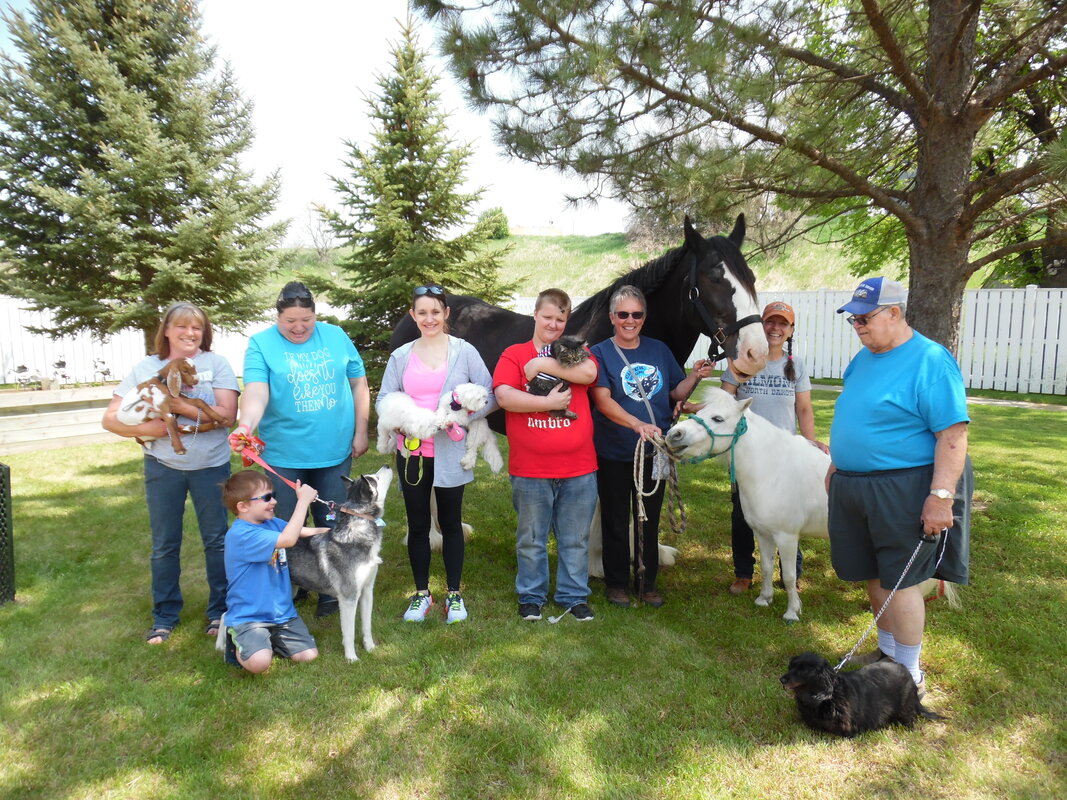 GLEN ULLIN, N.D. – Senator John Hoeven today presented Joseph F. Muller with the Korean Ambassador for Peace Medal, an expression of appreciation from the South Korean government in honor of those who served in the Korean War. Muller, a native of Haymarsh, North Dakota, was drafted into the military in 1951, served as a member of the National Guard’s 188th Field Artillery out of Mandan and achieved the rank of Corporal.

“This medal represents the gratitude of the South Korean people for Cpl. Muller’s service in helping to preserve their freedom from what would become one of the most oppressive and dangerous regimes in the modern world,” said Hoeven. “We must always remember the selfless service of our veterans, and Joseph Muller stands as a great example of this, both in his time overseas and as a member of his community. We join together with his family, the residents of Glen Ullin, the people of South Korea and our nation in thanking him for his service.”

Muller served in Korea from September 7, 1951, through September 6, 1952, and was previously awarded the Korean Service Medal, the Combat Infantryman’s Badge and the United Nations Service Medal. Following his honorable discharge in 1952, he worked as a carpenter, farmer and plumber, including 46 years of employment at the local hardware store in Glen Ullin and 16 years as a self-employed plumber. He married his wife, Delores, in 1953, and the two have four children, 9 grandchildren and 12 great-grandchildren. Muller has a long record of community service, having been a member of the American Legion and the Knights of Columbus for 64 years. 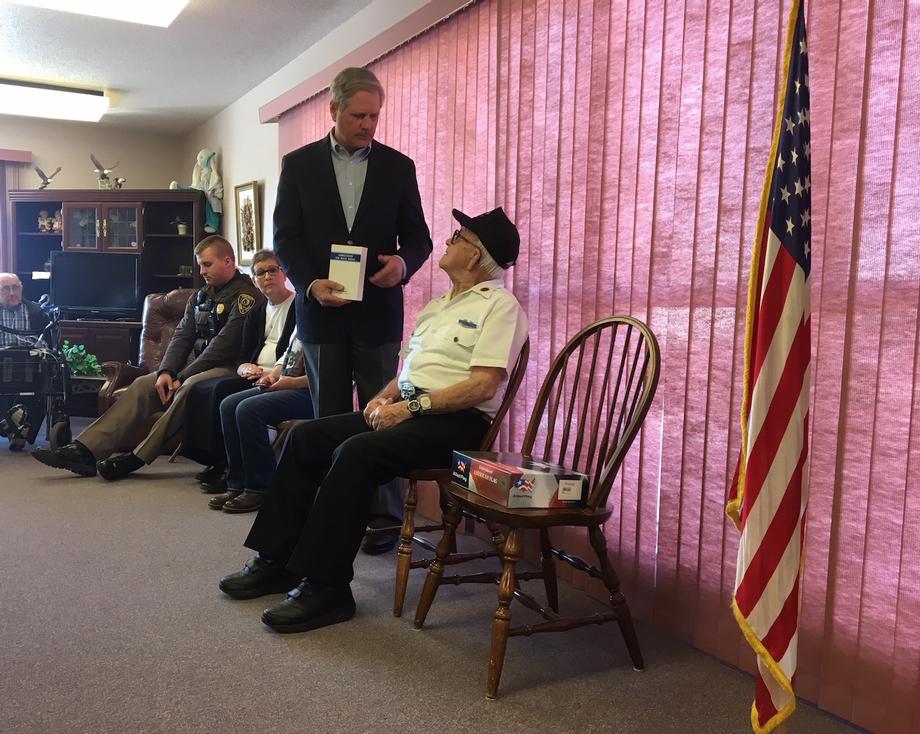 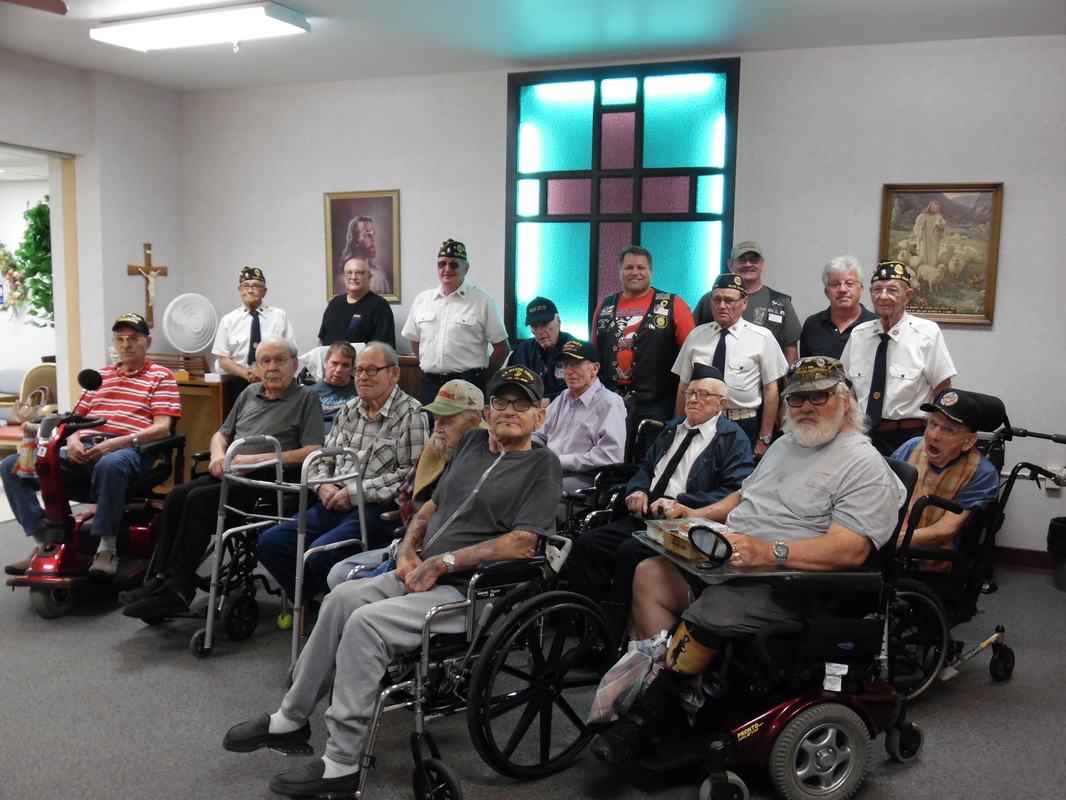